I love watching plays. Mainly because I am amazed at how well the actors perform & how the production team visualized & pulled off the entire production.

So last friday night I watched a play with the husband.

The story revolves around 5 gay care givers based in Israel. They’re care giver by day who tends to their disabled, sick, and old patients and an all-out diva group by night, known as “D Nightingales” who performs in a small club. But being just that isn’t enough for them, their ultimate dream is to be able to perform in a big night club in Tel Aviv.

Their story ranges from one another’s point of view. From the bombings all over the place, to the watchful eye of the immigration police. While one struggles to move from one employer to another, another falls madly in love with a mysterious guy who has his own secrets to tell. Each of them telling their own different stories yet all of them are fueled by their common dream, that is to help their families back in the Philippines and at the same  time to be who they are-Divas. 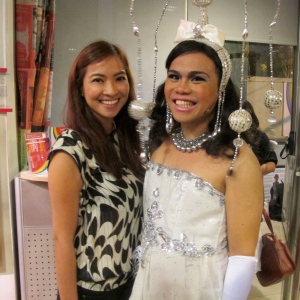 This play isn’t just about the characters being gay and that the story just doesn’t revolve around it. It’s also about how Filipinos are struggling elsewhere to provide for their loved ones, it’s also about knowing one’s self & being who you really are. It’s about love despite the cultural differences.

I was crying & laughing out loud at the same time while watching it.

Congratulations to the cast & production people behind this great show!

You can still catch Care Divas until March,2011. Reserve your tickets now!