Medyo emo post but I just wanna share that every time I step into a hospital, I am reminded of life and death. For me, it’s a place where sadness and happiness exist. How a visit to one’s doctor can prevent a life-threatening disease or even a common illness. Or how a microorganism that one cannot see nor feel symptoms of can take life away, slowly or instantly.

I know most moms are praning (worry rat) when it comes to their children. As much as I can, I try not to be one and I wasn’t one with lil’ Ms. JG, but with my second child, it was different.

Last month, my lil’ Mr. JG was confined for a week at the hospital. Prior to his hospitalisation, we brought him to his doctor over the weekend due to his incessant coughing. His doctor advised that on-off fever is expected until Tuesday the week after and all we need to do is continue his nebulisation to help clear his lungs of phlegm.

But come Monday morning, we had to rush him to hospital because his urine had blood, it was literally red and this alarmed us! Despite peeing blood, my three-year old still presents a happy disposition, no sign of any pain nor discomfort for him. So shempre, as a mom this made me more praning than ever! We knew something was wrong. It was hard because he wasn’t complaining of any pain so it wasn’t really an “emergency” per se but I was becoming agitated that I wanted the nurses and doctors at the ER to do necessary actions for his condition. But all they can do was run some tests and hook him on IV to keep him hydrated. 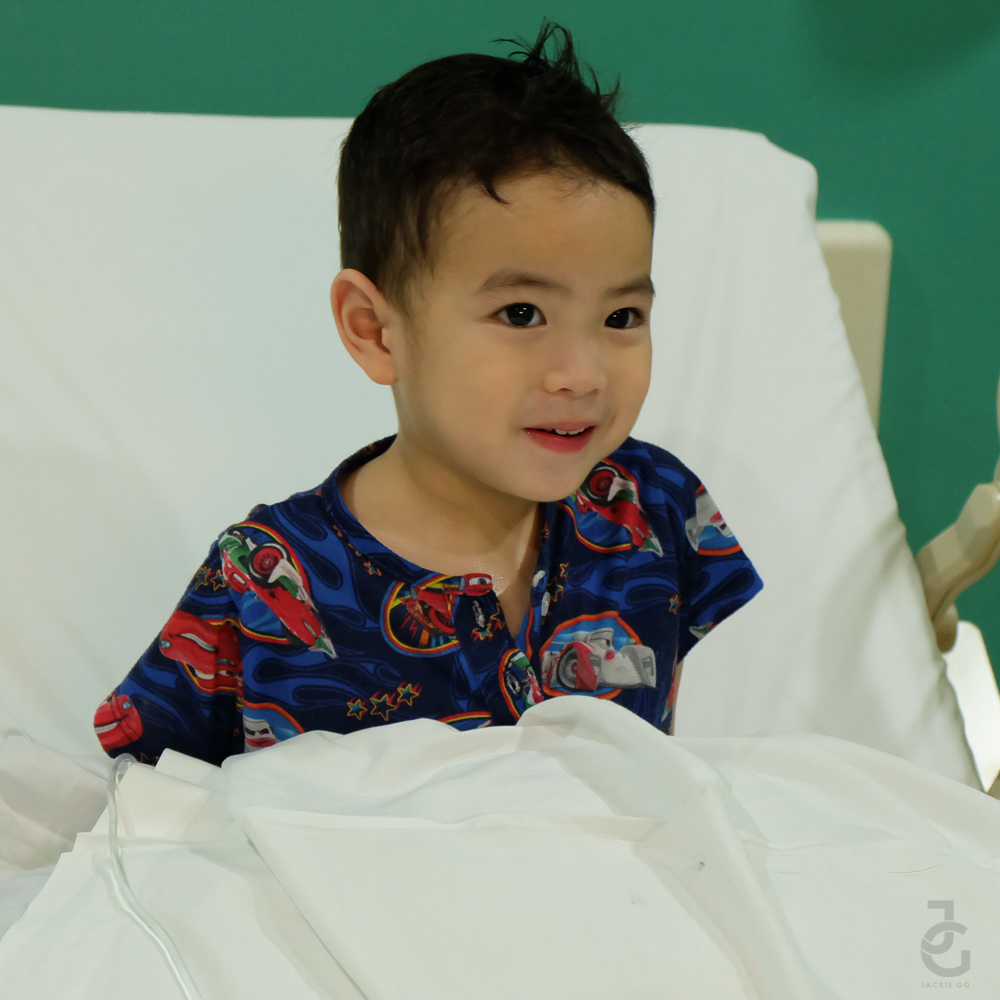 It was as if this lil’ guy wasn’t sick at all. His on-off fever, clogged nose and blood in his urine were the only symptoms he had, so the doctors advised us to stay for few more days so they can run some more tests. 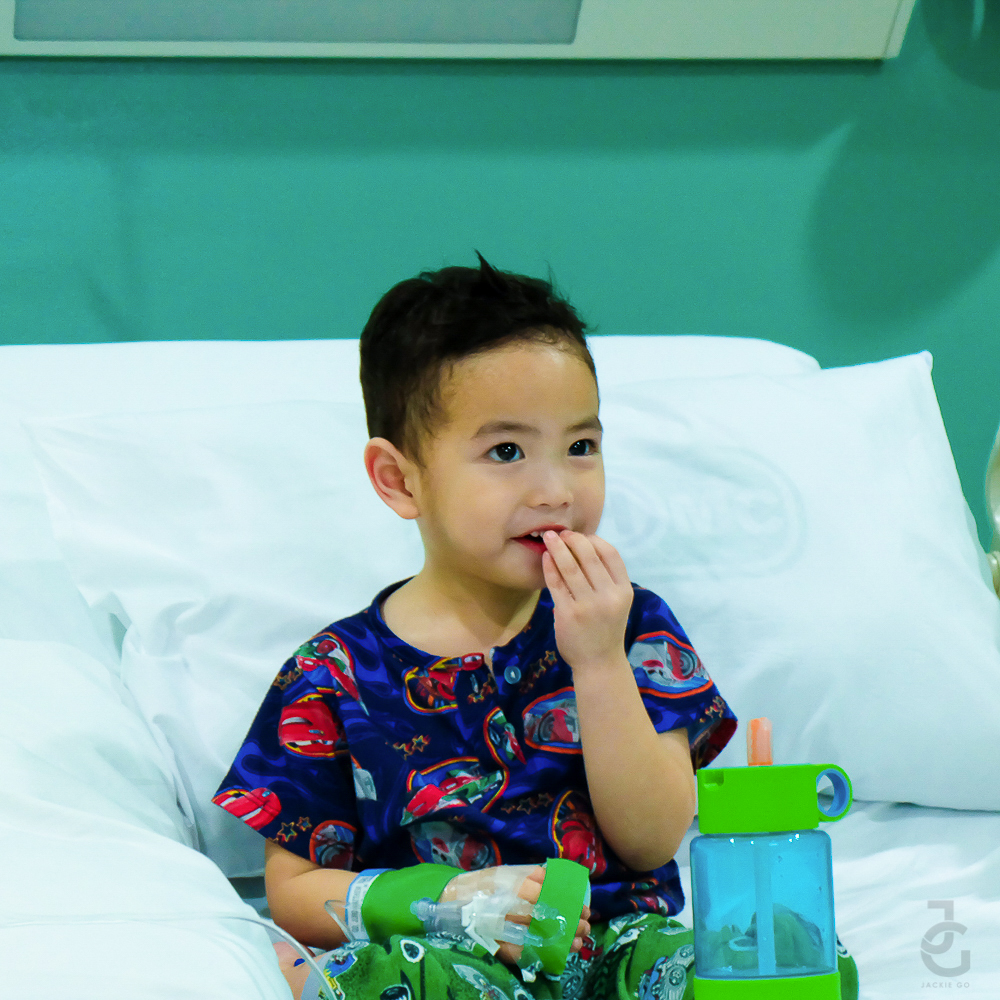 Every one who sent their well wishes kept on asking us what was the diagnosis and we really couldn’t give a concrete answer because even the doctors weren’t exactly sure what’s causing the blood in his urine. All they know is that he caught a virus that caused his incessant coughing – acute pneumonia is what was written in his chart. He was nebulizing every 4 hours and was given anti-histamine to help alleviate his clogged nose. If it wasn’t for the blood in his urine, we wouldn’t rush this cutie pie in the hospital. It was such a blessing in disguise. Had we not know, it would’ve been worse. Later on the tests showed that his kidneys were okay (whew) and was concluded that the blood was coming from either his bladder or urethra, passing through his urinary tract. In short, it was a case of severe UTI. UTI is something I am prone to, especially when I was pregnant with both my children. It also affected my lil’ Ms. JG when she was the same age as lil’ Mr. JG and was also confined in the hospital. But what my son’s doctor was concerned was how he got the UTI, given he drinks a lot of water and goes to the bathroom frequently. He said it could be random. The bacteria in his system draft picked him for no reason at all. Lucky lang talaga kami sa UTI lotto. Heehee. There are journals written that says UTI can be hereditary yet we are still uncertain if this is the case for my family. More, more tests in the future for us.

Still, I’m just thankful that we were able to detect it soon after it presented a warning sign. It’s hard to know any internal illness lalo na if the patient doesn’t show any signs of pain nor discomfort. This is the reason why I’m more praning with my son than with my daughter. My daughter kasi, konting kirot, she would say agad so I know something’s wrong. With my son, he has high tolerance for pain so it’s more challenging to know if something’s wrong. Look at this lil’ monkey! Up and about on his third day of antibiotics, fever free. He was so bored he turned his room into a playground! 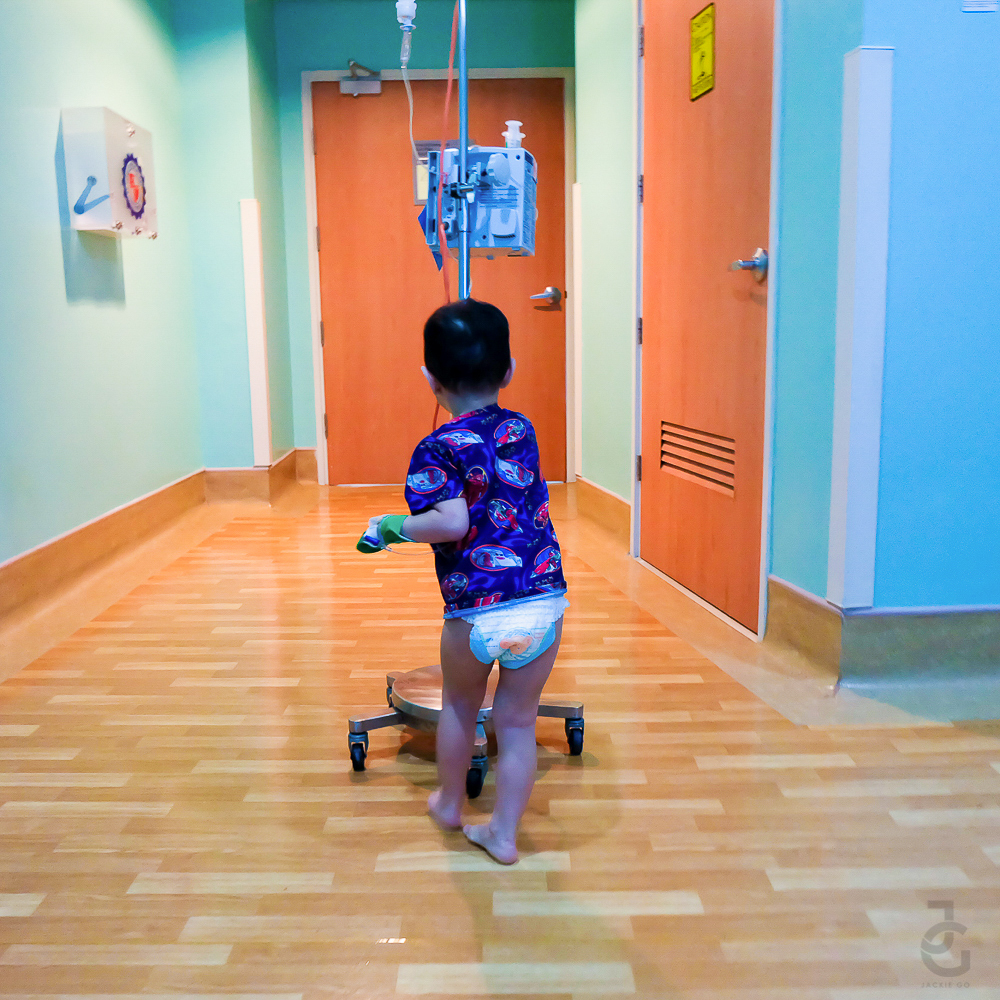 The latest hospitalisation in our family made me realize that anything can happen at any time to anyone. That health really is WEALTH. I know most people are so tired of hearing this old-age saying but it’s true. Nobody wants to be sick and it sucks to be sick or even see someone you love suffer. The last time I stayed in this hospital’s room was the time I gave birth to this little ball of energy we call Juro. Now we’re just very thankful our last stay helped him get back to his active, happy self. Hospitals really give me mixed emotions. It’s a place that gives happy memories, of the time I held my children for the first time, yet sometimes, sadness also comes from it. I’m just glad we’re back to regular programming. 😀

Hoping for good health from here on!