Last Tuesday night, my kids & I chanced upon San Andreas on HBO so we decided to stay a little bit late to watch it even though I’ve seen it already. A relaxing way to welcome the midweek holiday ended up with questions & observations from my kids.

Lil’ Mr. JG: Are we also gonna die if there’s an earthquake here?

That last statement from my 3-year old son vibrated anxiety and fear on my part. Living in a condominium has it’s perks yet it also has it’s disadvantages. One of which is when an earthquake happens there’s a great chance of us get trapped inside our building. Thinking about this scenario always makes me panicky. There had been two or more incidents where we, particularly I, sleepily wake up in the middle of the night thinking it was Mr. JG moving around the bed that caused gentle cradles only to find out it was an earthquake.

One time as I was about to fall asleep, I jolted out of bed ‘coz of a swaying sensation which I thought was just my vertigo, unfortunately, it was an earthquake that lasted more than a few seconds. To my panic, I woke up my husband and we rushed straight to our kids’ room, held them in our arms and off we went to the door.

I froze. Manic thoughts going through my mind immediately dispersed after hearing this question from my husband. The stairway exit was just right across us. Though the swaying stopped, adrenaline rush still ran through my body but I stood there frozen not knowing what to do. 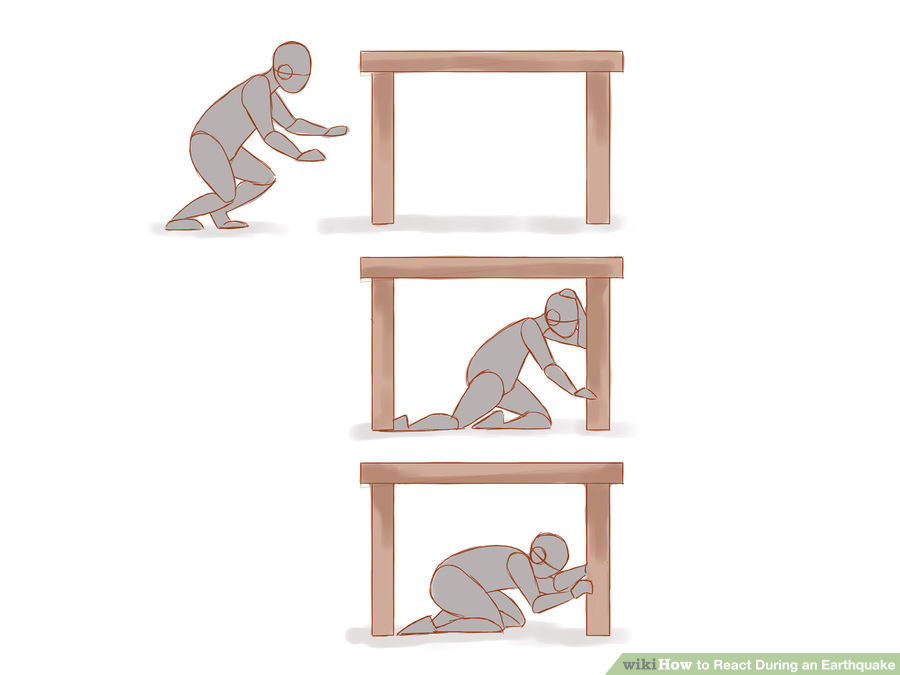 Lil’ Ms. JG: You know what mom, we had an earthquake drill in school and our teachers told us if there’s an earthquake we have to stop, cover and hold. We went under our tables and waited until the earthquake stopped.

My daughter shared this as we watched the scene from San Andreas where the people stuck inside the building went under the table to cover and hold.

But what happens when the earthquake is as strong as the one in San Andreas the movie? I silently asked myself as both my kids were still engaged discussing what to do.

Lil’ Mr. JG: But if we stay the building might fall on us and we’ll get trapped inside?

The debate between both my kids made me research on what it is that we really must do when an earthquake happens. In the incidents that we’ve personally experienced, trying to go down wasn’t successful– I ended up freezing right on our doorstep.

Some thoughts running through my mind as I watch San Andreas with my kids while recalling the earthquakes that we’ve felt over the past years.

I think it’s better to climb up the roof than go down. Should the building collapse like a pancake, it’ll be easier to get help from up top. If there’s a tsunami warning (though we live far from the coast line) going high ground is always the best idea.

What about the recommended act of stop, cover and hold? I don’t think our dinning table can hold us, given it’s made of glass. Not too sturdy eh?

They say if you’re on your bed while there’s an earthquake, better to protect yourself with pillows. But my reflexes lead me to go to my kids room? Should I stay or should I go?

Others say door frames are sturdy and going under it can protect you from falling debris. But when I researched, some say it’s not proven safe. To door or not to door? That is the question.

If you’re caught in the situation, I don’t think you get to remember a lot of things. You just tend to follow your gut and your instinct–where or what your adrenalin rush will take or tell you.

Triangle of Life illustrated by www.wikihow.com

There was one scene from San Andreas where Dwayne “The Rock” Johnson ushered a handful of people to the side of a baseball stadium. After another rattle, the rack of lights on top of the stadium collapsed and they were expecting it to fall directly down on them. But as gravity pulled it down, the huge metal lights clamoured down a few paces ahead of them. This scene perfectly showed how the triangle of life can save one from an earthquake.

Lil’ Ms. JG: How come they didn’t get crushed by the wall behind them mom? They didn’t cover and hold like what we do in our drills!

Now there had been a lot of debates if it is indeed the right way to act and protect yourself from getting squished, trapped or pinned down during an earthquake.

So I researched some more and stumbled upon the article by Rappler on the triangle of life which states that it isn’t proven legitimate and is not as promising as it shows. So which is better? Stop, cover and hold or triangle of life? You decide. 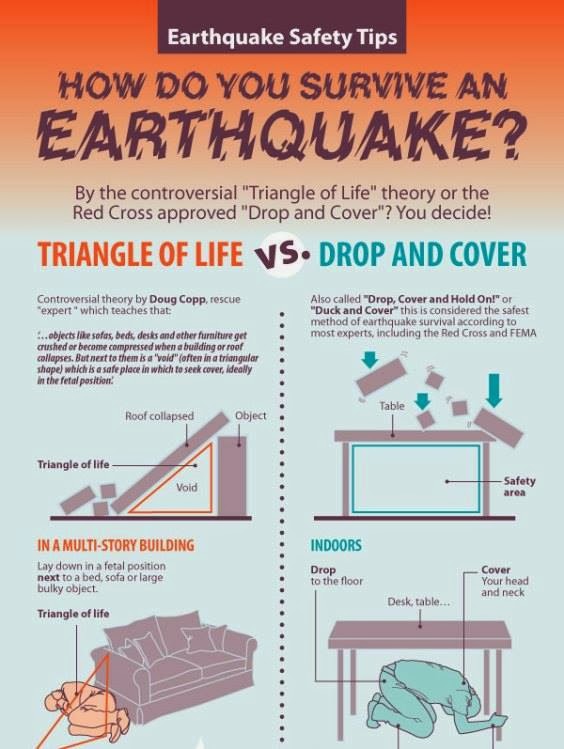 Realizing that the “big one” can happen anytime here in the Philippines, I knew I need to be prepared. Since we’ve done our research prior to moving to our current home, like most high rise buildings, ours have complied with the building code. Though it is not earthquake proof (no building ever is) it can withstand a quake with seismic loads of up to magnitude 8.0. Given the scenario that we’ve experienced in the past, I think I’m gonna try and just practice stop, cover and hold with my family should another quake happen while we’re at home. Best siguro if the sturdy object has a pocket of space so we can easily slid through that void if the sturdy object could no longer protect us.

Though we are prepared, I fervently pray should another earthquake happen, it won’t be the big one.