While on my way to a Price Club store for its membership sale, I heard on the radio that affected areas in Japan are now suffering scarcity with their basic commodities, primarily food. Given that situation it is said that the Japanese were willing to wait for a at least 6  hours to fall in line just to get whatever supply of commodity is available. Everything was in order, no one complained and everyone patiently waited for their turn.

So as I’ve reached the grocery entrance, people where standing  as far as the parking area and are trying to find their way on how to get inside the grocery first. Crazy as it may seem but after more than a few minutes (say 20-40 minutes) of lining up, a few (mostly elderly) people started coming up to the security personel asking what’s taking so long and  why they have not allowed anyone to enter. A good explanation was heard from the head of the security saying that a lot of people are still inside so they needed to wait for at least 10 people to go out.

Again, after a few more minutes, they’ve let a few people in. But the thing is, from where we were standing it seemed as if the line had not moved at all. One elderly lady noticed it and addressed this concern to a security personel, that some people who just came (without going at the end of the line) were actually the ones who got in first. This started a tension and almost everyone near the entrance ganged up on the security personel, pointing on how incompetent they are to secure a proper line and on how they allowed those who are not properly in line to get in first. Spell CHAOS.

So the main problem was the lack of preparation for the part of the grocery. They should’ve seen it coming that a lot of people will be storming their store because for most of us, the word SALE is alway enticing even more if you add on BUY ONE, GET ONE FREE?! Right.

There were no barricades or even a rope to guide the shoppers as to where the lines would start and end. When we got there, there was a big SNAKE shaped line (yes, snake)  not a zigzag nor S line formation. The snake line kept going & going until eventually people were piling up and there was no visible line. Thus, transforming the once quiet people on cue into an “angry mob” who all along wanted one thing to happen: to have a properly guided line in which they can fall in; which means no line-cutting,no VIP treatment,no pushing and no lame excuses such as:  I-was-already-inside-but-need-to-get-back-in-again, to not have a butt to butt,armpit to face,foot to foot and I-can’t-barely-breathe-‘coz-your-squishing-me-kind of moment with a total stranger. And after a few more conversations between the “angry mob” and the grocery staff, the latter were able to resolve the dilemma by creating a human chain to barricade the people trying to cut the line, then the CHAOS turned into a CALM STORM. Everyone was quite happy. Almost.

As what Ricci Chan tweeted:

Imagine this happened during a SALE of a store, people acted as if they’ll do anything to get in. What more can people do if they literally need to survive?  Beyond chaos. That I don’t want to imagine.

You see, today is no exception. People always tend to hurry, and will always choose a free way over a maze.

I wish all lines would require a certain proximity to avoid getting one each other’s space.

Tell me you can read the sign. Show me that you can. 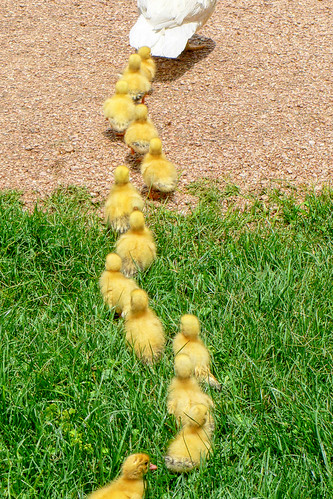 ‘Coz these ducks sure can.

You see we could learn from what happened in Japan, in a very simple way. We can learn from them that the best way to do things especially when in crisis is to react quickly yet calmly.

So please, fall in line properly.