For some strange reason, lately I’ve been more drawn to anything Korean. Korean skin care and food to be exact! During the last week of January, I had the honor of witnessing award-winning Korean Master Chef, Chef Bok Ik Jang prepare two Korean dishes that we, Filipinos have come to love – Gu Jeol Pan Rolls and Japchae. Chef Bok Ik Jang was busy preparing the ingredients for both dishes when Mish, Sab & I, along with a handful of guests arrived. So Kyungku Caleb Han, F&B  Operations Manager of Spiral, let us try three different Korean wines and educated with each of its purpose. 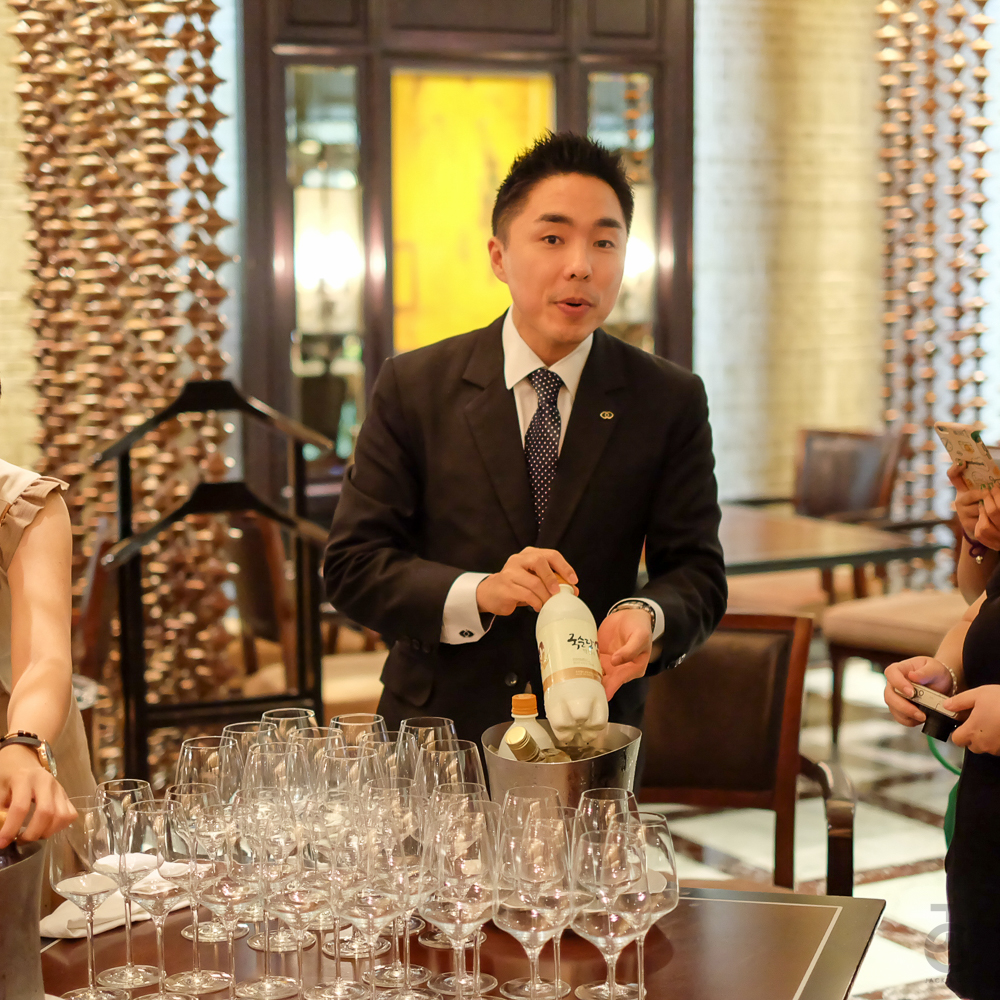 Mish & I had already met Caleb prior to this intimate event. He was actually one of the chefs during the Spiral Mother’s Legacy event two years ago, where chefs with different nationalities prepared a dish inspired by their mothers. This time around, he’s no longer in the kitchen prepping dishes for Spiral guests. He’s the one roaming around the luxury buffet restaurant, making sure that everything is perfect and everyone is having a grand time.

Caleb introduced us to three different kinds of Korean wines. Meet, Mageolli (rice wine). It’s the secret of most Korean women’s sought-after beauty. Rice wine is the secret of Korean women all over the world for their radiant skin. I love how refreshingly light and semi-sweet it is. Kinda reminds me of Yakult, you know that probiotic drink that everyone loves? To my delight Caleb said that a bottle of Mageolli is equivalent to 100 bottles of Yakult! Excuse me while I step outside for an hour *desperately finds a Korean grocery store for a bottle of Mageolli!* 😉 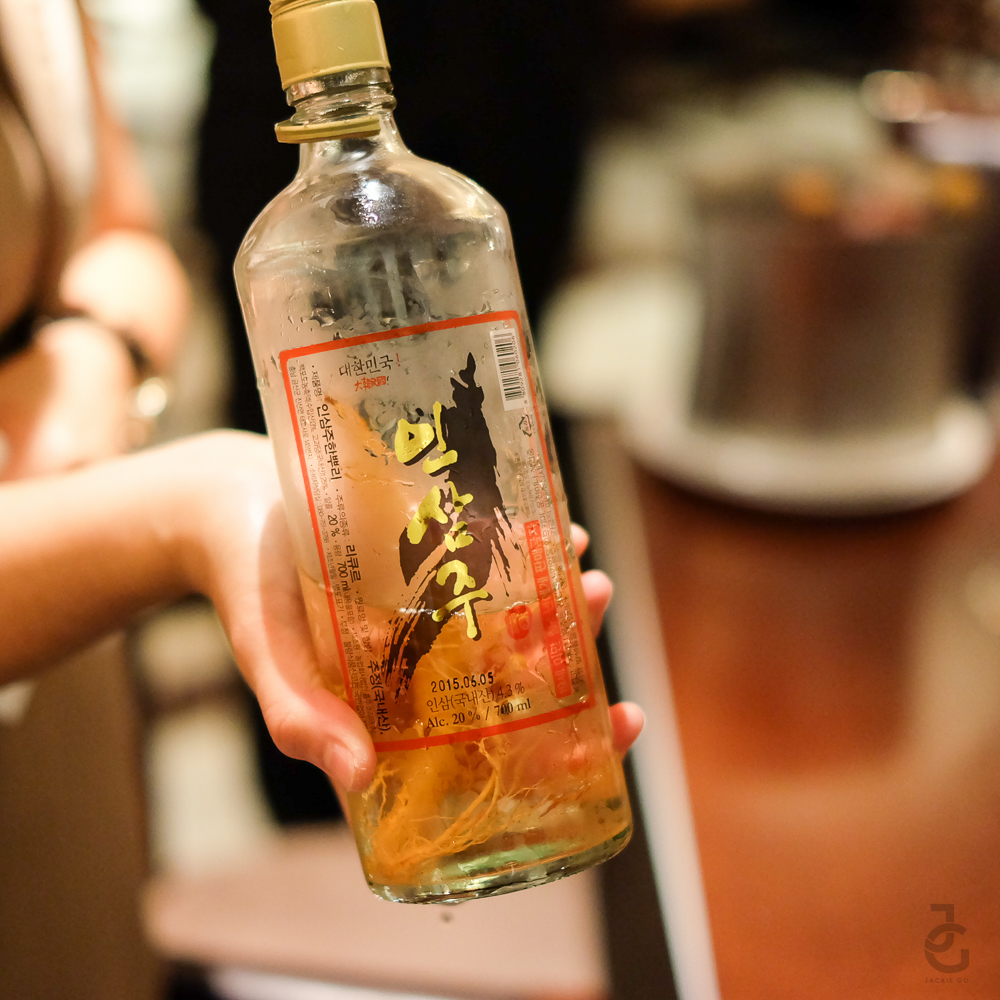 The next wine Caleb introduced to us was Insamju (ginseng wine).

It’s hard to miss the large ginseng root that effortlessly floats inside the bottle, waiting for us to get a glass to taste. Unlike the Mageolli, Insamju tastes strong and I was able to immediately taste the ginseng.

We all know that ginseng has great benefits when it comes to once overall health. So if you’re not a fan of adding ginseng to your dish, try drinking a glass of it everyday. According to Caleb, Insamju, when taken daily for at least a month, it can act as an appetite suppressant – perfect for people who have blood sugar concerns. It can also serve as an aphrodisiac for men (so I assume some men pair it with oysters?!)  and can aide in fertility for women. You all know what to wine to drink for what. 😉 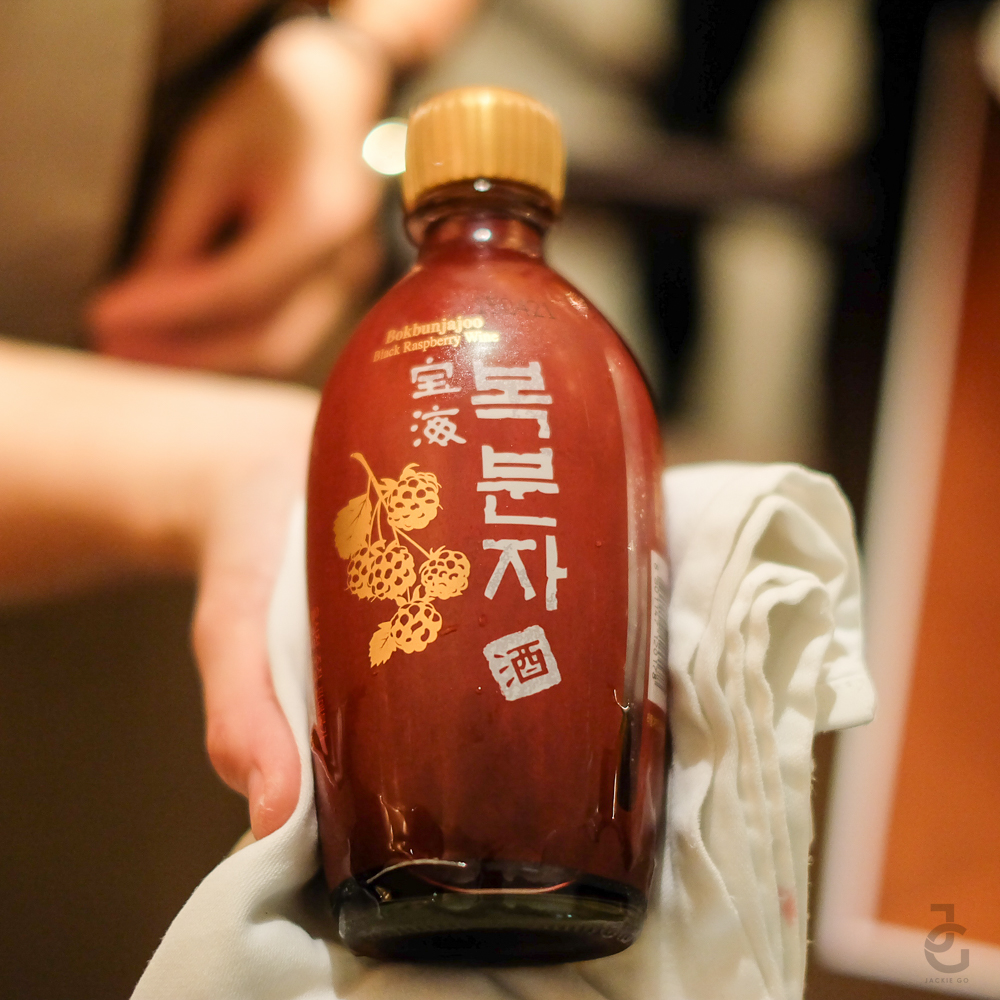 The third and final wine we tried was Bokbunjaju (red wine). Red wine made of different berries – I’m not so sure if I got this right, since Mish, Sab & I were enjoying ourselves with three glasses of wine that I think part of me was  day dreaming after the last glass. 😀 It was a sweet kind of red wine which is something that I would drink again. 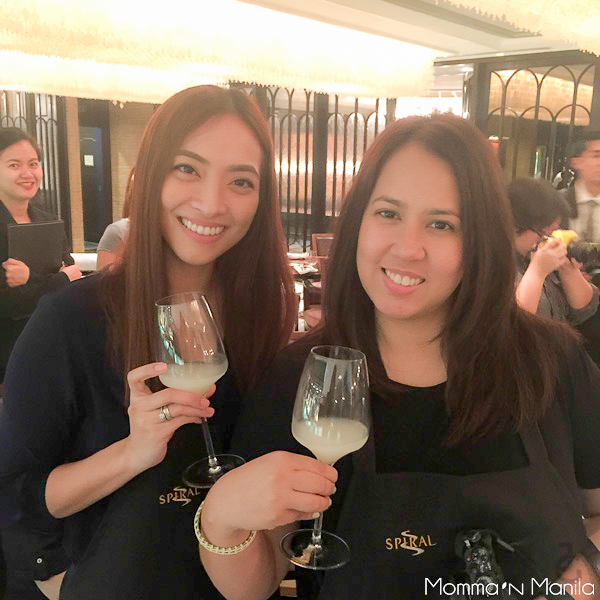 Sab, Mish & I truly enjoyed our glass of rice wine. It’s my favorite and as of writing I’m still in search for a bottle! Any leads as to where I can get Korean rice wine? 🙂 I want that Korean radiant skin! 😀 photo by MommaNManila. 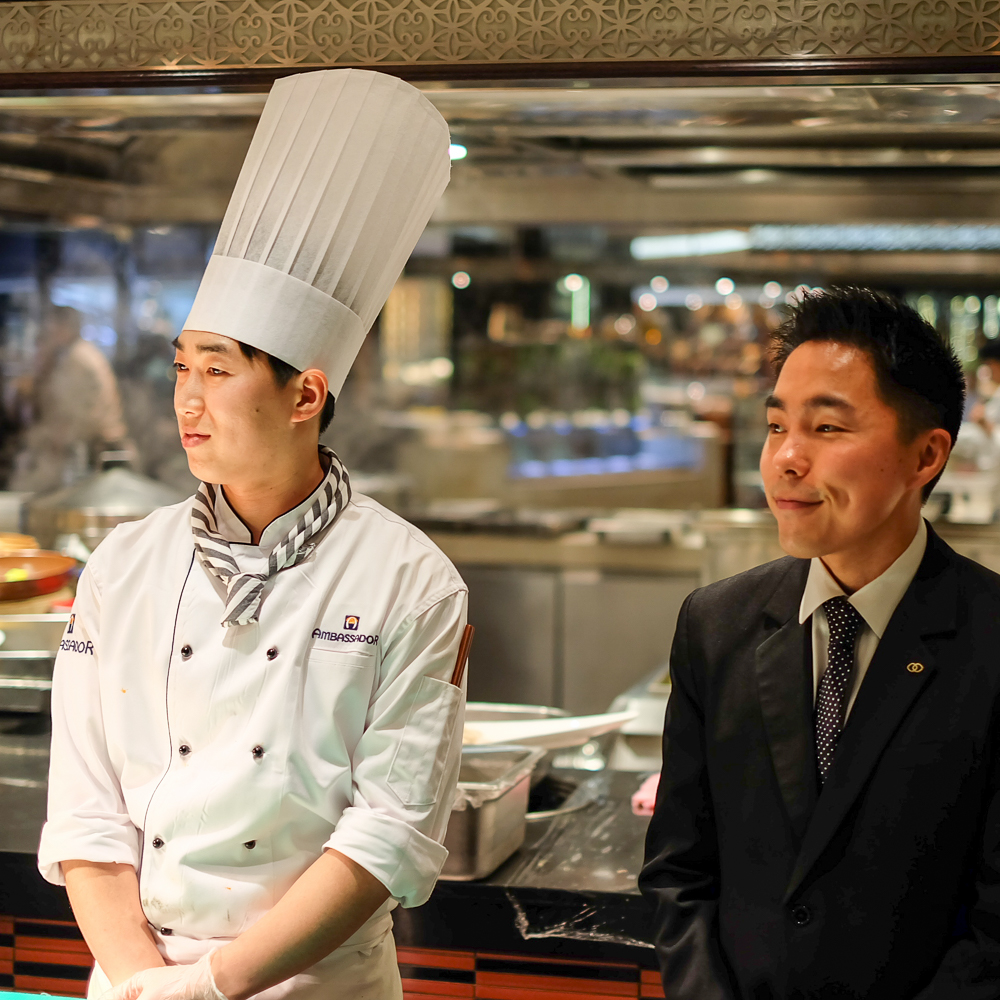 Shortly after our wine tasting, Chef Bok Ik Jang started the cooking class. By his side was Caleb who served as Chef Bok’s interpreter.

First dish was Gu Jeol Pan Rolls or famously known as Nine Section Tray. I’ve always been fascinated with Korean cuisine. How I get overwhelmed with a meal that serves a dozen little dishes which is made from fresh and healthy ingredients. Whenever I catch a glimpse of Koreanovela, I always salivate seeing them eat on table full of food! The way they present their dishes and they way they eat is always enticing. 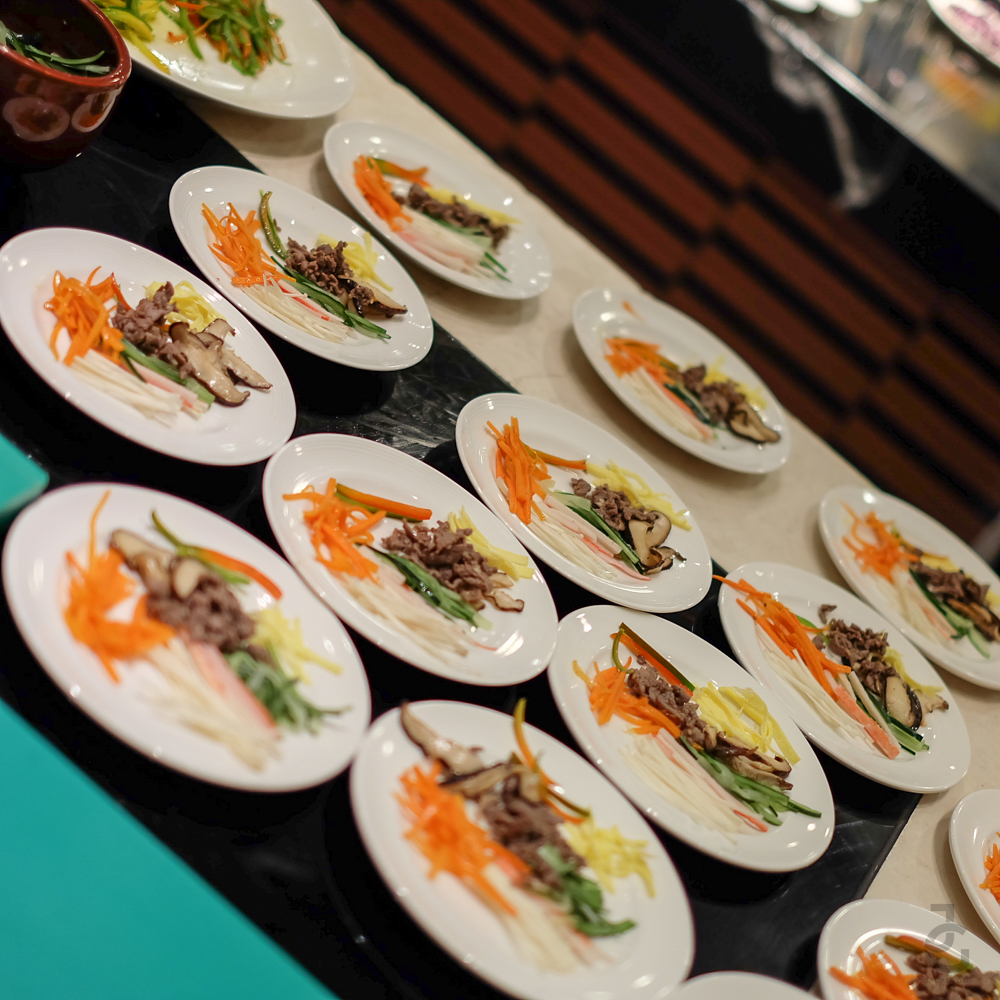 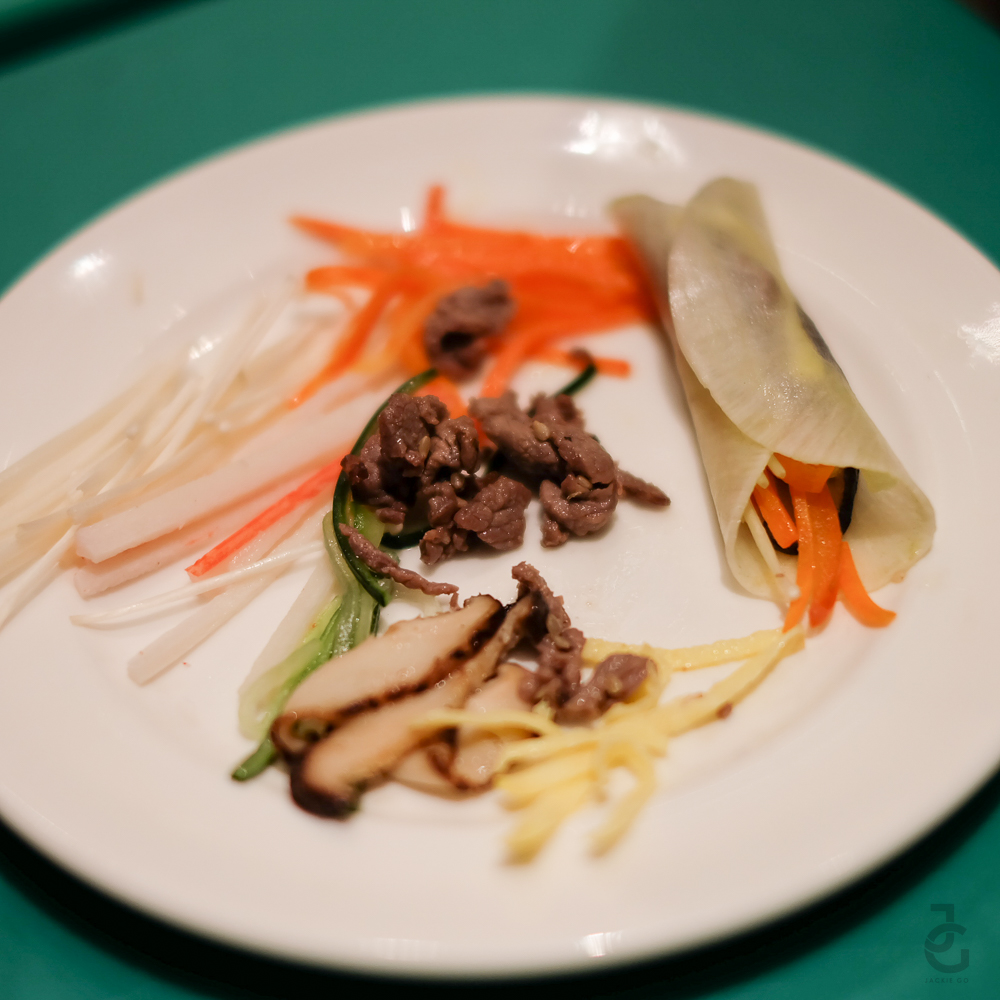 Gu Jeol Pan Rolls is like our version of Fresh Lumpiang Ubo (Spring Rolls). A few key ingredients (composed of vegetables and meat) that add texture, color and flavor to your wrap is all you need. 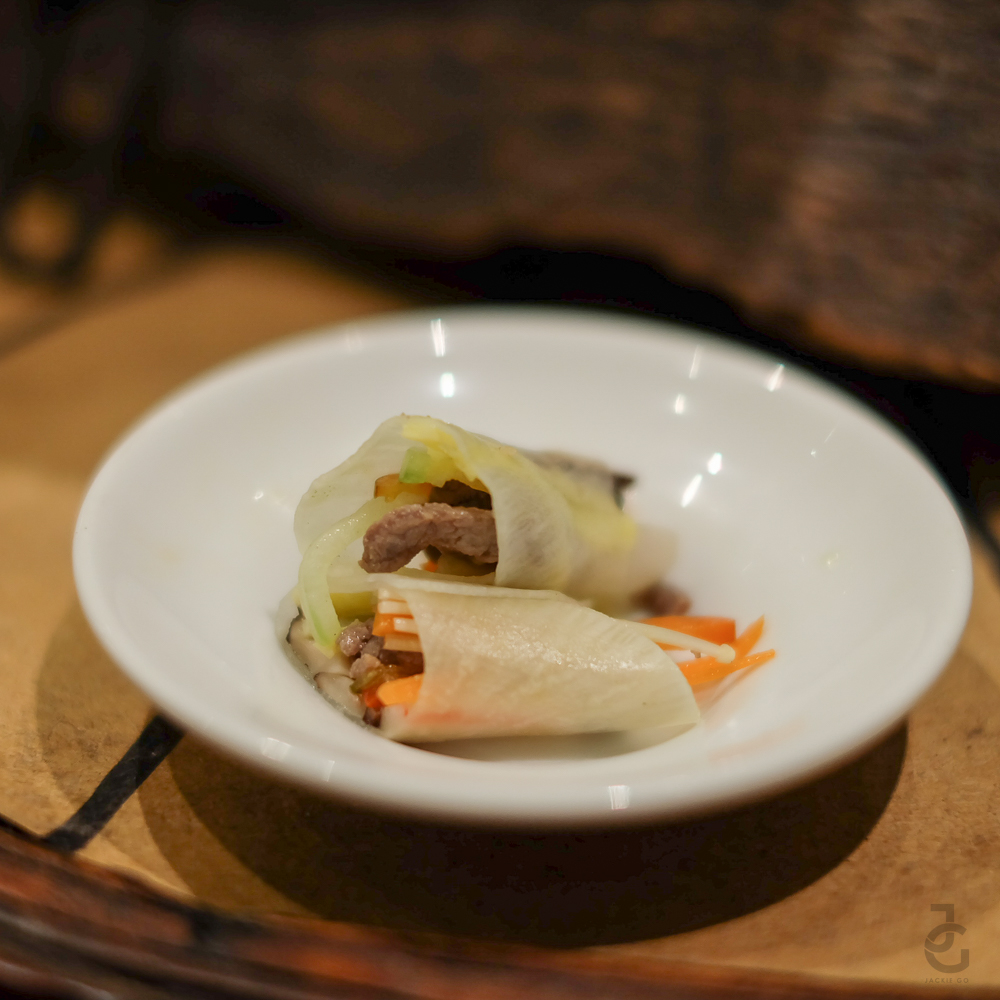 This was in belly 2 seconds after taking this photo. Yum! 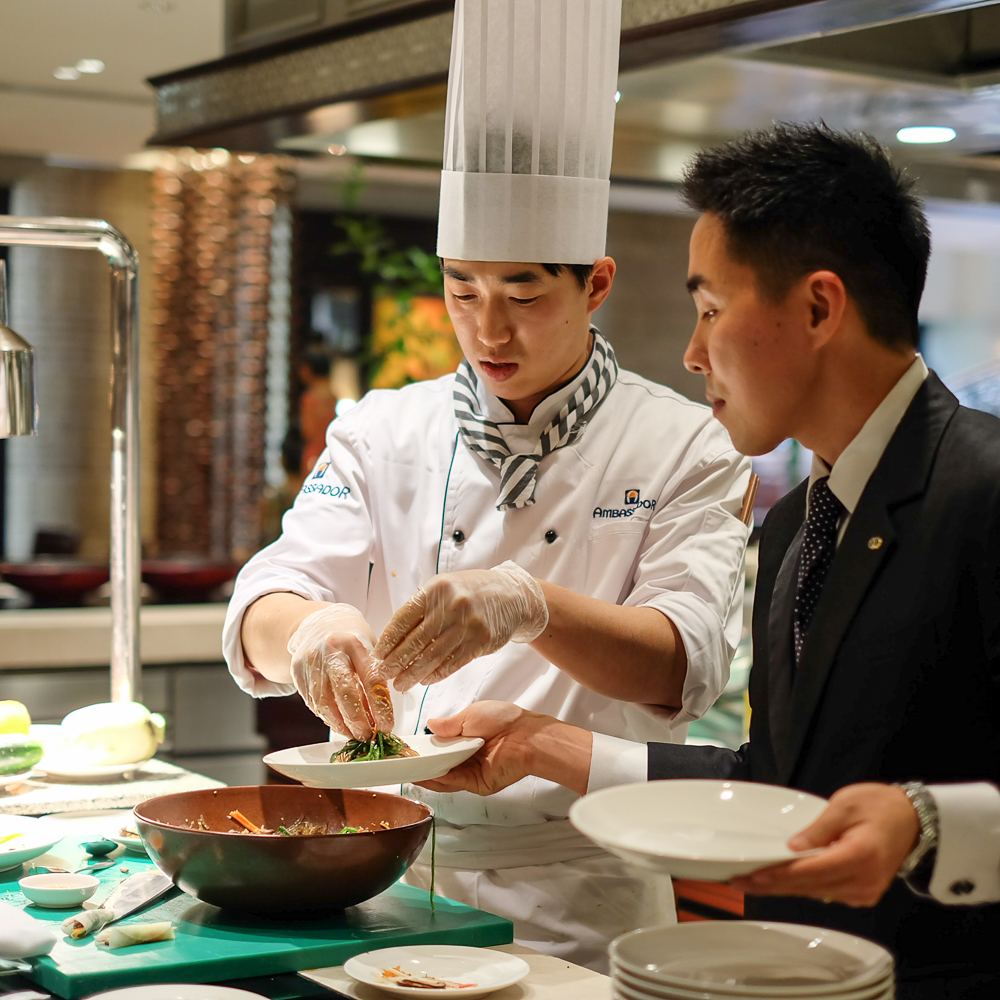 The second dish Chef Bok Ik Jang prepared was one of my favorite Korean dishes – Japchae! 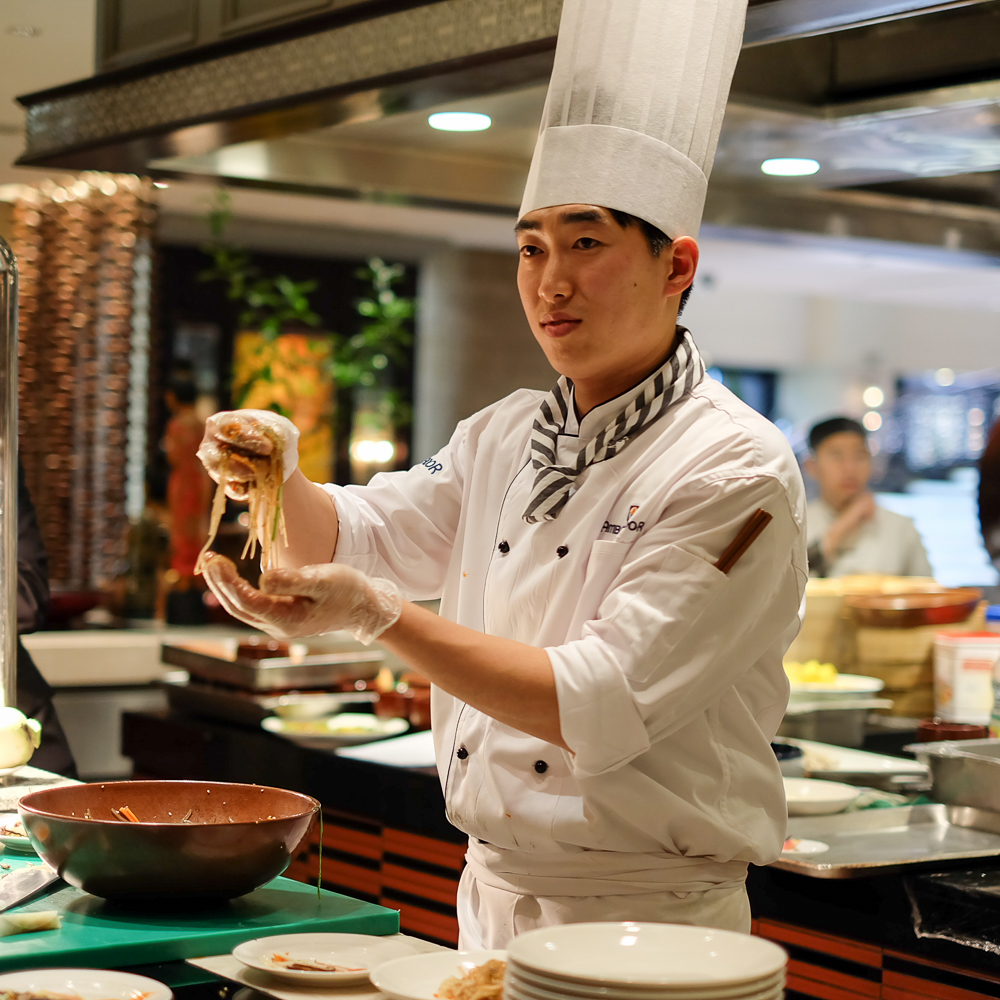 I haven’t tried making one because the consistency of the glass noodles can be tricky especially if not cooked properly. I want my Japchae cooked al dente and oozing with flavor. And Chef Bok Ik’s version is exactly that! 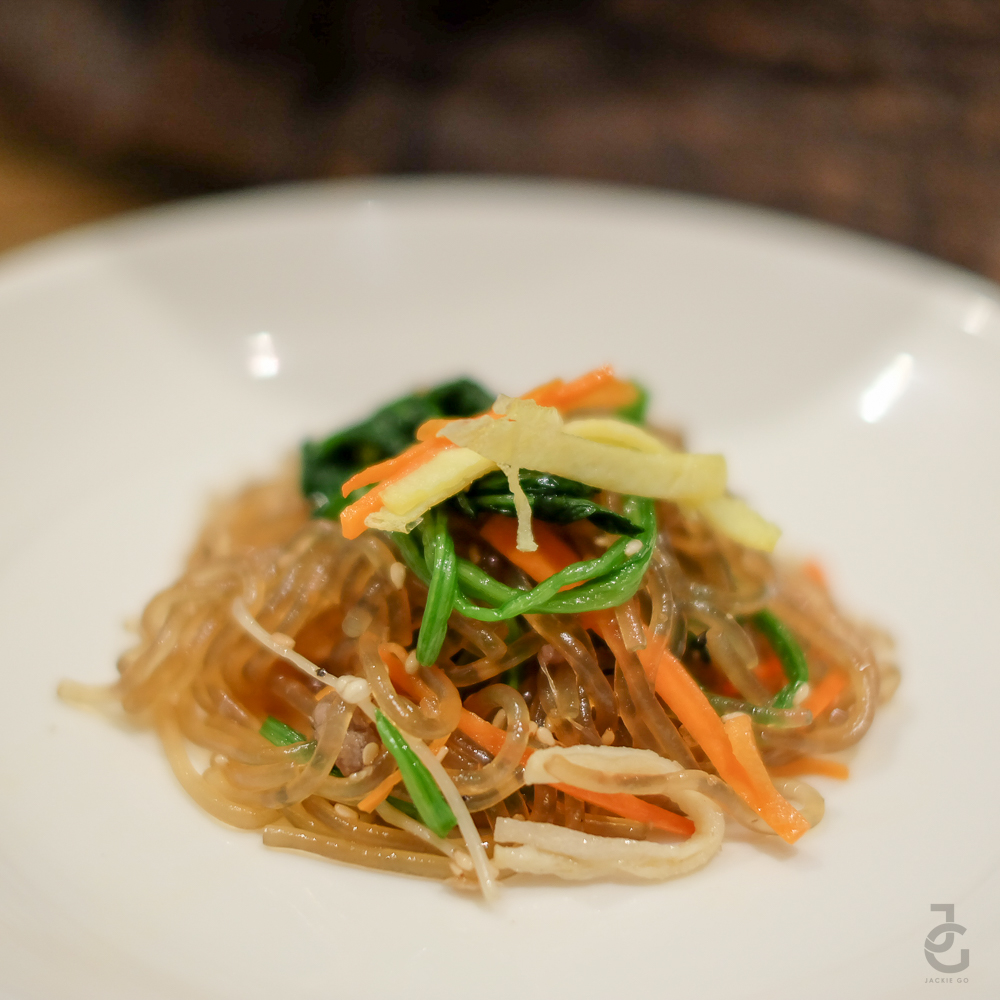 Sorry I wasn’t able to jot down the recipes, I was too busy munching on them. But luckily, Mish of MommaNManila wrote it down and shared it on her blog post, which you can download or print HERE. 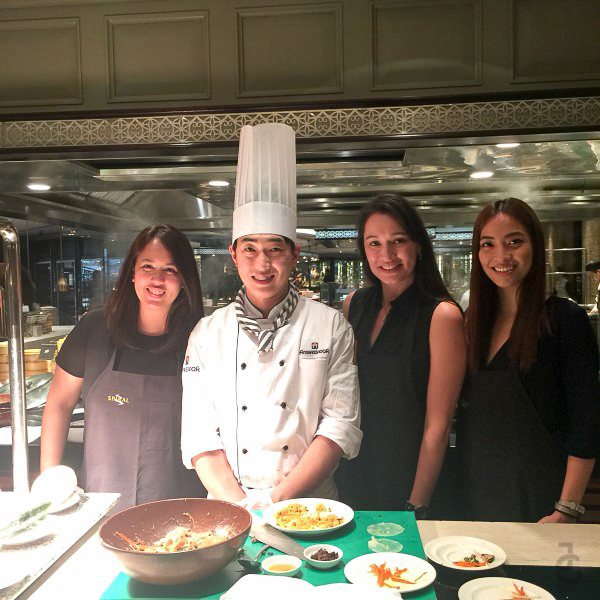 Attending Chef Bok Ik’s cooking class along two foodies and kitchen goddesses Sab & Mish was so much fun! Thanks for having us Spiral, Sofitel Manila!